The week commencing 21 June 2020, ELHT are holding a virtual PRIDE week as part of PRIDE month. We will be raising awareness via a number of activities, one being  a daily message posted on this page:

This month is pride month. Many of you may not know but people from the LGBTQ+ community face many health disparities and inequality; that’s why here at ELHT, we have taken on the Rainbow badges scheme.

By wearing the rainbow badge, you are not only breaking down the barriers LGBTQ+ people face when accessing health care but the badge also helps patients identify who they can turn to around health or wellbeing issues relating to gender and sexuality.

This week we have launched the Rainbow badges trust wide. You can obtain your rainbow badge by completing a short training session via the learning hub. I am absolutely overwhelmed and delighted to say that we already have 264 of you have completed the training in less than a week! Your badges are on their way, but please be patient! We have also been sending out a stream of information via social media and a daily message on our website. This gives more information on the badges and also about how to be an LGBTQ+ ally. Those of you based at or visiting Royal Blackburn Teaching Hospital may have also noticed the Pride flag flying! 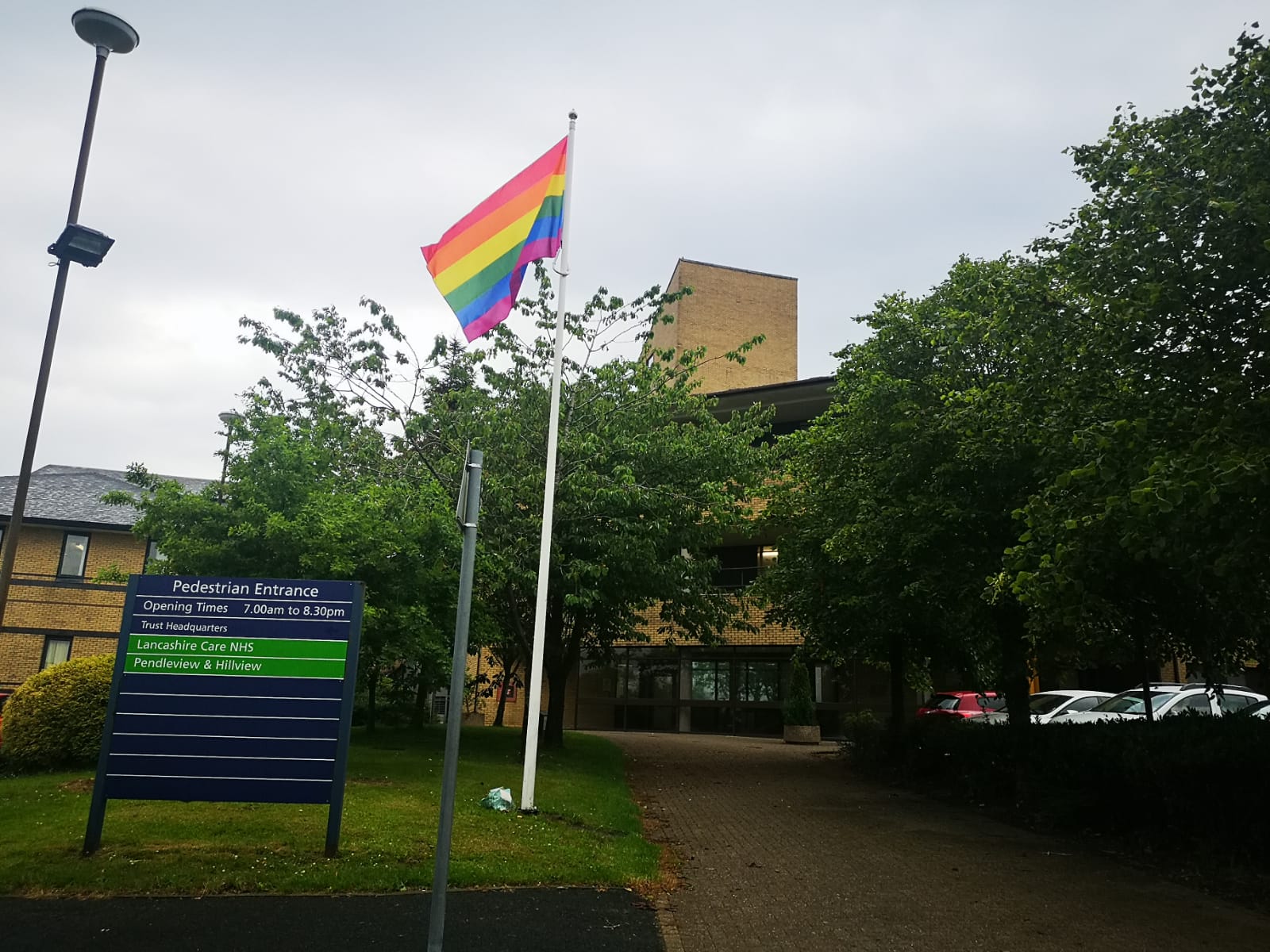 I would also like to take this opportunity to share with you that ELHT has brought together a number of inclusion groups to reiterate our stance that discrimination in any form will not be tolerated here at ELHT. These groups included the BAME, mental health, disabilities and last but not least the LGBTQ+ group. The LGBTQ+ group would like to extend an offer to anyone that may wish to be part of the group to get in contact, which you can do so at LGBTQ@elht.nhs.uk.

This month we are taking part in NHS England's Virtual Pride Celebrations in which you will see dedicated areas that showcase our solidarity with the LGBTQ+ community.

We hope that you will join ELHT in saying happy pride month and become part of the fight against discrimination.

Health does not discriminate and neither does ELHT.

This week, ELHT is celebrating it's first Pride week. It is an opportunity to celebrate the diversity of not only our staff and volunteers, but also our patients, visitors, and local communities. While we recognise the importance of colleagues bringing their whole selves to work and the strength that out diverse teams bring make us all stronger, we know there is always more we can do. That’s why the Trust has asked colleagues from different diverse groups to come together to help our organisation better understand the challenges and different experiences our colleagues face, to help shape and improve our Trust for the long term.

So why is Pride important?

Individuals identifying as LGBTQ (lesbian, gay, bisexual, transgender and queer or questioning), still face barriers in the workplace and experience inequalities in their experience of NHS healthcare.
So what can you do?

Become and LGBTQ+ ally. An ally is someone who doesn’t necessarily identify with the characteristics of the community, but that supports the communities fight for equality.

Here are some ways you can become an ally:

Educate yourself – People who are LGBTQ+ will experience the world differently to their heterosexual counterparts. There will be different struggles and challenges that your LGBTQ+ friends and colleagues will face that you will never experience, but you can use that privilege for good! You can learn about the diversity within the community, how we’ve reclaimed the word queer to empower rather than demonise us. Learn about our history and how we’ve had to fight for the equalities we have. Learn about the inequalities that still exist, both in this country legally and culturally, but also in other countries. Did you know there are still 73 countries where being gay is a criminal offence? You can watch films or documentaries, read books or articles, follow LGBTQ+ activists and organisations. Many LGBTQ+ people are happy to answer questions when asked in the right way and with the right intentions, but don’t rely on that one LGBTQ+ person in your office. Some people are happy to talk about their experience and share what they know about the LGBTQ+ community, but not everyone is, and it can be a lot of emotional work for that person. You can start by searching for LGBTQ on the learning hub and completing the training.

Use appropriate language – Using the wrong words can be harmful, so use some of that learning you’ve done and put it to good use. None of us get everything right all of the time, so try not to be afraid. Show respect and sensitivity; ask your colleagues, patients and friends which pronouns they prefer. If you get it wrong, apologise, and remember for next time.

Listen and speak up, but not over – Listen to what your LGBTQ+ peers are saying, what experiences they’ve had, don’t compare them to your own. Every diverse community has their own struggles and just because you share some characteristics with your colleague or friend, doesn’t mean you’re able to totally understand. Listen and show empathy. Speaking up is vital, if you hear someone use an anti-LGBTQ+ term, make a crude comment or a harmful joke, challenge them. Use the platforms you have to advocate to LGBTQ+ people, if you’re involved in making policy or process decisions, consider how decisions might affect LGBTQ+ people, ask if this is the best we can do. Don’t speak over the voices of your LGBTQ+ peers, try instead to support them to raise their voices.

Take action – Don’t support businesses with discriminatory policies or politicians who voice intolerance. Instead share information, raise awareness of issues and support LGBTQ+ businesses. Sign petitions, donate to LGBTQ+ charities and activist groups if you can, normalise the difficult conversations, keep the conversation going and join your staff LGBTQ+ network by emailing lgbtq@elht.nhs.uk.

Day 3 - Wear your colours with Pride

On Friday 26 July, staff at ELHT will be donning their rainbow colours to show their support for the LGBTQ+ community.

NHS rainbow badges are a national initiative which originated in Evelina London Children's Hospital to make a positive difference by promoting a message of inclusion.

We are inviting staff to take the Rainbow Badge Pledge. By taking this pledge and choosing to wear this badge, you are sending a message that “you can talk to me” about issues of gender and sexuality. You will not be expected to solve all issues and concerns but you are indicating that you are a friendly ear. Before you wear you Rainbow badge we expect staff to undertake a short training exercise to help you gain a better understanding of the responsibility of our badge wearers, issues facing our LGBTQ+ community (staff and service users) and what other support you might signpost to. If you are interested in doing this training and wearing the Rainbow Badge, please send your details to LGBTQ@ELHT.NHS.UK and we will send you details of how to access the training.

A 2018 Stonewall survey stated that lesbian, gay, bisexual and transgender (LGBT+) patients face inequalities in their experience of NHS healthcare.

· One in eight LGBT people (13 per cent) have experienced some form of unequal treatment from healthcare staff because they’re LGBTQ.

· One in twenty LGBT people (five per cent) have been pressured to access services to question or change their sexual orientation when accessing healthcare services.

· One in five LGBT people (19 per cent) aren’t ‘out’ to any healthcare professional about their sexual orientation when seeking general medical care. This number rises to 40 per cent of bi men and 29 per cent of bi women.

· The survey estimates that one in five LGBT+ people are not out to any healthcare professional about their sexual orientation when seeking general medical care, and one in seven LGBT+ people have avoided treatment for fear of discrimination.

Day 1 - What is LGBTQ+ and what issues do they face at work?

LGBTQ is an acronym for lesbian, gay, bisexual, transgender and queer or questioning. The + represents inclusivity of all identities regardless of how a person defines themselves.

These terms are used to describe a person’s sexual orientation or gender identity.

Stonewall is a lesbian, gay, bisexual and transgender (LGBT) rights charity. Their 2018 LGBT in Britain Workplace report showed that:

June is PRIDE Month. In countries all over the world LGBTQ+ people (and their allies) take to the streets. They remember the bravery of the people that who stood up to hate after the police raided The Stonewall Inn in New York City in June 1968. They wave flags, demand equality and acceptance and celebrate the strength of the LGBTQ+ community.

Pride month is a way for LGBTQ+ people to be seen and heard. It is a time to remind us that across the world, in 2020 the LGBTQ+ community are still fighting for the right to be safe, to be legal, for the right to get married or to have children. That in 2020, couples still look around to see if it’s okay to hold the hand of someone they love. For all of these reasons, many LGBTQ+ people do not feel able to ‘be who they are’, at home or at work.

At ELHT we are fully supportive of our LGBTQ+ staff and want all of our staff to feel able to be who they are at work. To support this our LGBTQ+ Inclusion Staff Network will be celebrating ELHT Pride next week as well as launching the NHS Rainbow Badge scheme and training.

In the current circumstances, this will be a relatively low key, virtual celebration but we invite you join us, to listen and to learn more about how you can promote, champion and encourage LGBTQ+ diversity, inclusion and equality in the workplace.

Look out for more updates and that you can invovled across our message of the day and social media sites next week!