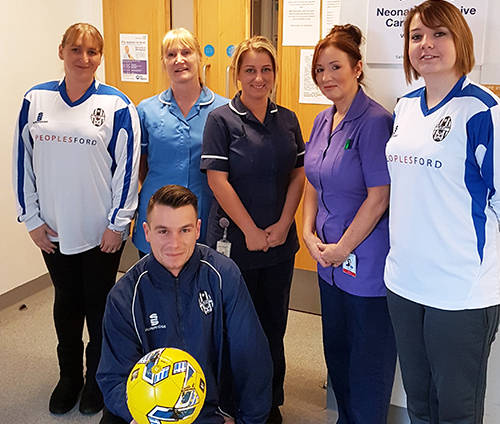 A team of Accrington-based footballing mums have scored with a £610 donation to the Neonatal Intensive Care Unit (NICU) at Burnley General Teaching Hospital.

After playing several fundraising matches, the sporting mums nominated the NICU at Burnley General Teaching Hospital as their chosen charity.

Denise Gee fundraising manager for East Lancashire Hospital’s charity ELHT&me is delighted that the ladies chose to support the NICU ward and promised the funds raised will be very useful for upgrading and developing services above and beyond the NHS standard.

“The team started as a chance for mums of children who play at Globe to understand the game and also to have fun and keep fit,” said Amanda Leach, whose son Nathan, nine, plays for the club’s Under-11s.

“We are very proud to be able to support our local NICU which provides excellent treatment and care for local mums and their babies.”

Coach Ben Taylor thought it was unfair that all the mums stood at the side watching and supporting their children, so invited them to get involved.

“The final match at Bullough Park was against Rosegrove mum’s team who also donated and helped boost the final donation to a wonderful £610,” says Ben.

The Neonatal Intensive Care Unit is one of the busiest facilities at the Lancashire Women and Newborn Centre (LWNC) where more than 4,000 babies are born and cared for each year.

The LWNC has a Level 3 Neonatal Intensive Care Unit, the highest standard among all hospitals in Lancashire and Cumbria.