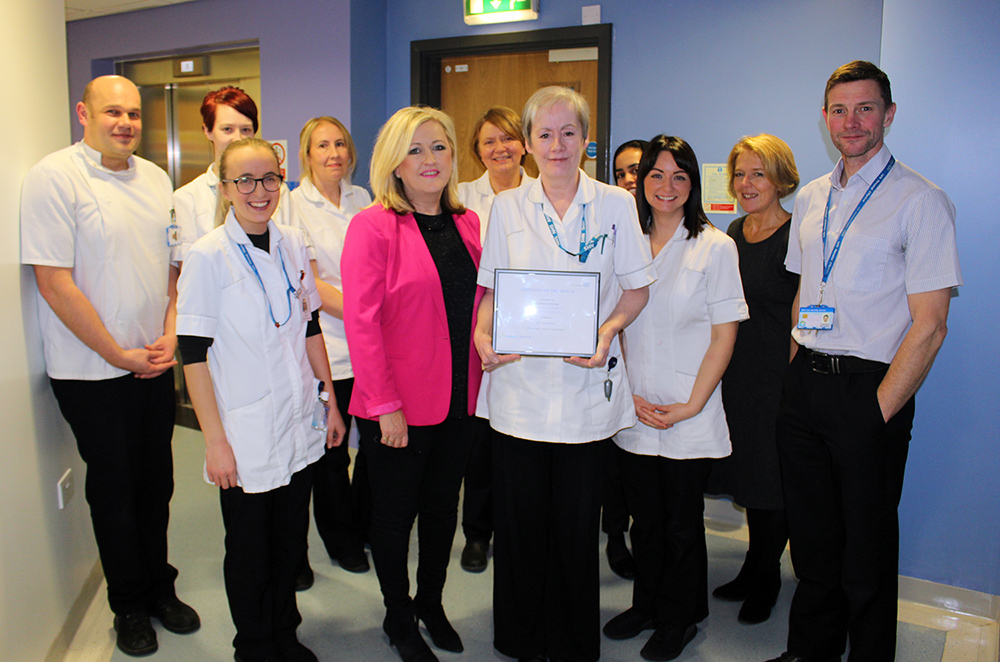 Pictured: Catherine (centre, right) receives her Employee of the Month awards from ELHT Director of Communications Christine Hughes, watched by her podiatry colleagues

An NHS podiatrist whose rapid response after discovering her next patient had collapsed has been recognised by East Lancashire Hospitals NHS Trust (ELHT) with its Employee of the Month award for December.

Catherine Veevers, a Specialist Podiatrist with the NHS Podiatry Service based at Yarnspinners Health Centre, arrived at the house in Nelson to find lights on but no-one answering the front door.

Feeling concerned, Catherine peered through the lounge window and was shocked to see her patient lying on the floor.

“As a result of Catherine’s quick action, what could have a bad situation could have been much, much worse,” said Catherine’s colleague, Podiatry Service and Professional Development Lead Jennifer Smith.

“Catherine displayed the professional and personal values we have to expect from her – ensuring safe, personal and effective care for her patient.”

Catherine joined East Lancashire Hospitals in 2002 and worked as a Healthcare Assistant on Hartley Ward, Pendle Community hospital for 14 years. After completing her Podiatry degree, she joined the Integrated Therapy Team in 2017.

Catherine was nominated for and subsequently won East Lancashire Hospital’s Employee of the Month award. Surrounded by her podiatry colleagues, Catherine received her award from ELHT Director of Communications and Engagement, Christine Hughes.

“We are very proud of Catherine,” said Christine Hughes. “As well as using her skills and experience to help a patient in distress, she remained calm under pressure and acted in a highly professional manner.”

“Catherine was nominated by her colleagues and I’m sure I speak for them, as well as the patient and her family, when I say ‘thank you, Catherine’.

In addition to being named Employee of the Month, Catherine is shortlisted for the ELHT ‘Employee of the Year’ award to be presented at the Trust’s STAR Awards ceremony in the Spring.